i want to volunteer

BROTHERS CLEATS GIVE HOPE TO 3 MILLION 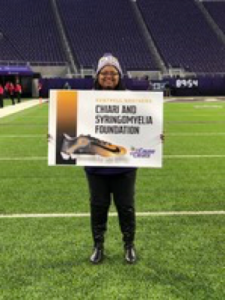 On Sunday, December 16, 2018, each of the members of the Minnesota Vikings team took to the field wearing custom cleats designed in honor of a cause, in which they are personally vested, for the My Cause My Cleats campaign. Inspired by both his mother and aunt, Kentrell Brothers, number forty, chose the Chiari & Syringomyelia Foundation as his cause and sported the cleats during the Vikings’ victory against the Miami Dolphins.

Kia Brothers, Kentrell’s mother, was diagnosed with Chiari malformation in November 2015, after almost one year of misdiagnoses and unsuccessful treatments for the Chiari-related symptoms including: headaches, neck pain, dizziness, even occasional numbness and paralysis in her left hand. Though symptoms may vary, based on his mother’s description of her daily pain, Kentrell likens Chiari symptoms to feeling like having a concussion all the time.

Referred by a sports agent, in February of 2016, Kia travelled to Boulder, Colorado to see Dr. Villavicencio. “Dr. V”, as the Brothers family refers to him, found a syrinx on Kia’s MRI films and explained to her that if she waited much longer to have surgery, she may experience permanent nerve damage. On March 17, 2016, St. Patrick’s Day, Kia underwent surgery. Obviously concerned for his mother, Kentrell wanted to be by her side but this had been a big year for him as it was his senior year and Kia’s surgery date coincided with Pro-Day at the University of Missouri, Kentrell’s alma mater. Kia asked her son not to worry about her and ensured him that she would be fine. She encouraged him to concentrate on what he had to do, get drafted and he did!

Since her surgery in 2016, Kia has felt some relief of symptoms. Though she feels that her symptoms have decreased, they are not completely alleviated, something that rings true for most Chiari patients. Kia must still take pain medication regularly for temporary relief. The Brothers family has also discovered that Kia’s sister, Kentrell’s aunt, has been diagnosed with Chiari. She has just recently undergone surgery and is recovering well.

Though surgery and pain medication are treatments for Chiari malformation, there is no known cure for the disorder. Research, education, and awareness will unlock answers for the three million people affected by Chiari. Kia and Kentrell helping to generate national awareness through the My Cause My Cleats campaign is a true example of what it means to be the key to the cure!

The first installment of the CSF sponsored video series and unite@thehill movement has been posted on our website! To view it and begin your journey towards successful advocacy for the over one million families affected by Chiari malformation, syringomyelia, and related disorders, click here.

Dorothy Poppe, Executive Director of the Chiari & Syringomyelia Foundation returned to Washington DC to continue talks with the NIH. We are pleased to report that our meeting on July 20th with Katrina Gwinn, MD, Program Director, Extramural Research Program and Naomi Kleithman, PhD, Program Director, NIH/NINDS Repair & Plasticity Cluster at the National Institute of Health (NIH) was productive. CSF wanted to reach out to Dr. Gwinn who works in the Neurogenetics Cluster as a Program Director at NINDS, and handles a portfolio of diseases and disorders for the NIH/NINDS. Chiari malformation is part of her recently acquired portfolio. This meeting was an opportunity to educate Dr. Gwinn on CSF’s key board members, mission, accomplishments and research goals.

The NIH is very interested in working with CSF on a research consensus projects and continued collaboration. Dr. Edward C. Benzel and Dr. John Heiss will help to move this project forward. Check back often, as more information on this project will be detailed in the coming months.

CSF is thrilled to announce that the 2018 unite@thehill will be a two-day patient conference of action! Join us on Sunday-Monday June 24-25, 2018 at the Bethesda North Marriott Hotel and Conference Center as we take on a day of learning and advocacy training and a full-day of marching on Capitol Hill to bring the patient voice to the powerful men and women in Congress who can enact laws that can help!

The House of Representatives voted to pass the 21st Century Cures Act (HR 6) in 2015 and on December 7, 2016, the US Senate voted to pass an amended version of the bill! This legislation is incredibly important to our Chiari, syringomyelia and related disorder community! It ensures that scientists, doctors, and professionals around the country are given the opportunity to pursue new, exciting research projects and to ultimately ensure that innovative, effective solutions are found for patients– especially those who struggle with chronic, poorly understood conditions like CM, SM and related disorders.

What can 21st Century Cures Accomplish?

You can see a full list of the sections/stipulations of this legislation on the US Congress’ website. You can learn even more about 21st Century Cures and how it got started on the website for the Committee on Energy And Commerce

What is S.849: Advancing Research for Neurological Diseases Act?

This bill was introduced by Senator Johnny Isakson (R-GA) as another part of 21st Century Cures. The goal of this bill is to specifically create a centralized data collection system to be maintained by the CDC to collect data on neurological conditions. Collecting and providing this data to researchers could be vital to help determine the cause conditions like Chiari malformations and syringomyelia. In addition to helping to find a cause, this data could help medical providers determine how to best care for patients with these conditions as well as help policy makers determine how to better understand these and many other neurological conditions.

CSF walks to The Hill

For Chiari and Syringomyelia Awareness Month in September 2013, CSF Executive Director Dorothy Poppe and Chapter Coordinator Cathy Poznik collected letters written by individuals who are personally affected by Chiari malformation, syringomyelia and related disorders.  These letters were personally walked up to the offices of the letter writer’s respective representative of the Senate and Congress in Washington DC.

After the letters were delivered, Dorothy and Cathy held meetings with several offices of representatives in both the Senate and Congress to discuss the desperate need for more federal funding for the NIH and other entities that can, in turn, promote research into more complex conditions such as CM, SM and related disorders.

The summer might be winding down for most, but late July proved to be a very exciting time for CSF. On Tuesday, July 21, Executive Director Dorothy Poppe along with board members and co-founders Paul Farrell and Lory Watson headed to the capitol city to put some long-discussed plans into action. Our first stop was the National Institutes of Health (NIH). There, the three of us had the pleasure of meeting Dr. Robert Riddle and Dr. Naomi Kleitman, both of whom work in the National Institute of Neurological Disorders and Stroke (NINDS) in the Neuroscience Center.

Dr. Riddle is the Program Director for the Neurogenetics Cluster and Dr. Naomi Kleitman is the Program Director of Repair and Plasticity.Our two hour-long meeting provided some much needed education for us and gave us some great ideas as to how we might be able to compete for the limited funds that are available. We were also able to extend an invite to them to attend our 2010 “Think Tank” Strategic plan meeting in Philadelphia in May 2010 to foster research agendas and provide a forum for collaboration. The Fiscal Year (FY) 2009 budget for (NINDS) is $1,545,397,000 and CSF hopes to direct a small portion for research initiatives directed at Chiari malformation, syringomyelia and related disorders. We will be working with our Medical Research Board to put together possible study ideas prior to approaching NINDS again.

The next morning, after saying goodbye to Paul, Lory and Dorothy were thrilled to represent CSF as members of the Christopher and Dana Reeve Paralysis Task Force at their think tank meeting in southwest DC. The two-day meeting, which included about 110 people from across the US, was designed to discuss issues pertaining to the quality of life of paralyzed people and how best individuals, corporations and governments might be inspired to help meet their needs. Topics such as care-giving, health promotion, multicultural outreach and surveillance were all discussed in-depth. It was a great opportunity for CSF to include their specific concerns and needs in the discussion as well as for CSF to network with organizations similar to ours. One of the goals of CSF is to partner with like organizations so we can realize the benefits of pooling our knowledge and our resources to accomplish shared goals.

That same day, our dinner plans included co-hosting our first of many educational meetings in the DC area. These free education and awareness meetings, which act like mini-conferences, are designed to educate and inspire physicians and patients about CM and SM and encourage them to become advocates for CSF in their peer groups.

Dr. Fraser Henderson, Chief of Neurosurgery at Doctors Community Hospital in Lanham, MD, was the gracious host of the event. He, along with Scott Gregerson, Vice President of Strategy and Development at Doctors Community Hospital and our CSF chapter representatives in the DC area, pulled together approximately 50 healthcare professionals, patients and activists for a lively 3-hour meeting. Attendees not only learned details about CM and SM from Dr. Fraser Henderson Sr., Dr. Robert Gerwin, and Dr. Alexander Mark, in addition, they also learned about CSF and our goals with respect to these conditions.

It was a great end to a busy day. The feedback we received was fantastic and we look forward to meeting up with Dr. Henderson on October 13th for an even more spectacular event. All in all, our first trip to Washington was a great success. If you are interested in becoming a part of our lobbying committee and helping us to further our reach into the “belly of the beast”, please contact us. We need your help.

Since its inception in 2007, CSF has made a pledge to our members to work with national organizations such as the Christopher and Dana Reeve Foundation to advocate for families affected by Chiari malformation and syringomyelia. Advocacy requires demonstration of a significant affected population to warrant time and funding from our government. Working with national groups that have access to a larger membership helps us reach our goals more quickly. Dorothy Poppe, CSF’s Executive Director, has been working with the Christopher and Dana Reeve Foundation for the past eight years and in July 2009, Dorothy and CSF Board member, Lory Watson will work with the Foundation once again.

Our joint goal for the meeting is to come away with recommendations which will form the basis of the national action plan for paralysis and physical disability.

National Prevalence Survey of Paralysis and Spinal Cord Injury in the United states, 2008