Topic: The genesis of venous hypertension and its influence on the CNS in Chiari  and hereditary connective tissue disorder populations 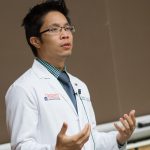 Kenneth Liu joined the faculty of the Department of Neurological Surgery and Neuroscience Institute at the Penn State Milton S. Hershey Medical Center in 2017. He holds joint appointments in the Departments of Radiology and Neurology. As a board-certified fellowship-trained neurovascular surgeon, he brings a unique skillset to Penn State Hershey’s very busy Stroke Center. As a neurosurgeon trained in both open and endovascular techniques, he is uniquely qualified to consult on patients with cerebrovascular disease, offer an unbiased opinion between open and minimally-invasive surgeries, and provide the safest and most effective treatment options.

Dr. Liu was born in Princeton, New Jersey, and raised in the San Francisco Bay Area. He obtained a B.A. in Molecular and Cell Biology from the University of California at Berkeley in 1997 with an emphasis in Neurobiology. He was the only graduate in his class to receive an Outstanding Service award for his contributions to the University. During his time at Berkeley, he was an active competitor in taekwondo and was nationally ranked at the collegiate level. In 2001, he received his medical degree from the Keck School of Medicine at the University of Southern California. He completed a residency in neurological surgery at the Oregon Health & Science University in Portland, OR, in 2008, during which he performed nearly 200 skull base procedures under the tutelage of Drs. Kim Burchiel and Johnny Delashaw. The University honored him with the Outstanding Consultant of the Year award in 2005. During his residency, he spent two years in the laboratory under the guidance of Dr. Patricia Hurn investigating the role of the hormonal milieu and its effects on neuroprotection in ischemia. He was awarded the Basic Science Award for his scientific contributions at the Western Neurosurgical Society 2007 annual meeting.

Following his post-graduate training, he completed a two-year fellowship in neurointerventional surgery under Dr. Stanley Barnwell at the Dotter Interventional Institute in Portland, OR, while maintaining a busy general neurosurgical practice as a member of the neurosurgical faculty at the Oregon Health & Science University.

In 2010, he joined the faculty at the University of Virginia in Charlottesville, VA, where he was the Director of Neurovascular Surgery as well as the Co-Director of the Stroke Center. During his tenure there, he was one of the busiest surgeons on the Eastern seaboard, performing nearly a thousand procedures a year and treating patients from all over the world.

Dr. Liu has an active research interest in traditional cerebrovascular neurosurgery but has also pioneered investigations into the clinical optimization of intracranial venous outflow and is currently investigating alterations in cerebral hemodynamics in various disease states. He has pioneered minimally-invasive treatments for devastating and difficult to treat conditions, such as intracerebral hemorrhage and idiopathic intracranial hypertension and often consults on patients from all over the world. In addition to being the principal investigator on many clinical trials, Dr. Liu also has a keen interest in device and technology development in the endovascular arena and is the principal investigator on several device trials. In addition to having been funded by the Department of Defense and working with NASA, he is also investigating applications of near infrared spectroscopy in imaging brain perfusion. He is a strong proponent of the use of Internet technologies in medical and surgical education and is considered by many in the neurosurgical community as one of the leaders in the field. He has published over one hundred peer-reviewed articles and book chapters, is often invited to give lectures nationally and internationally, and has been named one of the Best Doctors in America.

Dr. Henderson joined Georgetown University, in Washington D.C. as Director of Neurosurgery of the Spine and Cranio-cervical Junction in 1994. He was Co-Director of the Lombardi Neuro-Oncology Division, Co-Director of the CyberKnife Radiosurgery Center, and Medical Director of the Neuroscience ICU and step-down units. He has published over 70 peer reviewed articles and book chapters, and given over 170 invited lectures with a focus on cancer, radiosurgery and the treatment of spine disorders. Dr Henderson is currently in the Top Surgeons (Consumers Research Council of America), Best Doctors in America, Top Doctors (Nichols Institute), and Top Doctors for Northern Virginia, and was awarded the Mayfield Neurosurgical Research Award in 2008. Dr Henderson his wife, Becky, and three sons- Fraser, Lansdale and Landon live on a farm in Prince Georges County.

About Dr. Fisher: I am a cardiologist who specializes in Adult Congenital Heart Disease, pregnancy and pulmonary hypertension. Since 2011, I have served as the Director of Women’s and Complex Heart Diseases at the University of Maryland School of Medicine, Division of Cardiovascular Medicine where I am an Associate Professor of Medicine and Pediatrics. I also direct the Adult Congenital Heart fellowship program at the University of Maryland School of Medicine. I am a member of the American Heart Association Greater Maryland Board of Directors.

After completing my fellowship in 2001, I joined a Baltimore cardiology practice and I became the Director of Women’s Cardiovascular Services and the Co-Director of the Cardiac Critical Care Unit at Sinai Hospital in Baltimore, positions which I held until 2011. I then joined University of Maryland School of Medicine to start and Direct the Adult Congenital Heart Program.

I am currently board certified in Cardiology and Adult Congenital Heart Disease.