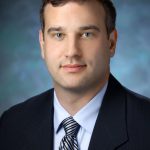 Dr. Eric Jackson is an assistant professor in the Department of Neurosurgery at Johns Hopkins.  As his practice is primarily in pediatric neurosurgery, he specializes in the evaluation and treatment of patients with a broad range of neurosurgical disorders, including congenital malformations of the brain and spine, chiari malformation, hydrocephalus (including endoscopic treatment), craniosynostosis, spinal dysraphism/tethered cord, brain and spinal cord tumors, and traumatic brain injuries.  In addition to his pediatric neurosurgery practice, he sees and treats adult patients with Chiari malformation.  He is one of the Co-Directors of the Johns Hopkins Chiari Center and the Principal Investigator at Johns Hopkins for the Park-Reeves Syringomyelia Research Consortium and the ongoing clinical trial.

Dr. Jackson received his A.B. degree with highest honors in psychology and biology from Harvard College.  He earned his M.D. with distinction from the University of Michigan Medical School and completed his residency in neurosurgery at the University of Pennsylvania. He completed a pediatric neurosurgery fellowship at Children’s Hospital Boston/Harvard University. Dr. Jackson came to Johns Hopkins from a faculty appointment at Nationwide Children’s Hospital/Ohio State University.